Michelangelo Pistoletto was in Trentino to visit the Arte Sella Landart Park and unveil a work called “La Trincea della Pace” (The Trench of Peace) inspired by his Terzo Paradiso. 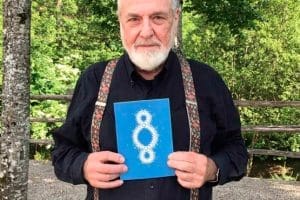 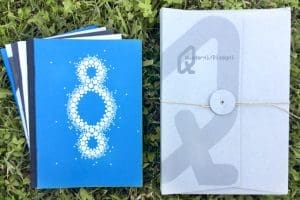 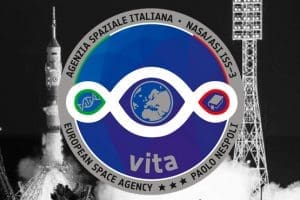 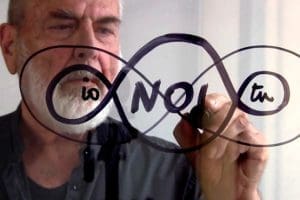 We had the pleasure of presenting the artist with a copy of the “Terzo Paradiso” notebook, which carries his unique reworking of the sign for infinity on its cover. The same symbol was recently used by the Soyuz probe, travelling into space as the last phase in the Life Project.
The Terzo Paradiso notebook is one of six items in the collection Quaderni/Disegni (Notebooks/Drawings): A Mala Arti Visive (Mala Visual Arts) project, developed together with Arbos and launched in June 2016.

Quaderni/Disegni is a collection of artwork in the form of notebooks. The project involved 6 artists, chosen by museums and contemporary art institutions and asked to design a cover for a notebook.
The results were surprising, producing not simply decorative covers but genuine works of art: a collection of artist’s notebooks that can act as bridges between daily life and the world of art and culture, creating a precious space for reflection.
“Quaderni/Disegni” is therefore an art project on an industrial scale, the successor to the original “Quaderno” created by Mala Arti Visive in 1994. The project is unique within Europe, and through it Arbos aims to promote its idea of “contamination” between the world of business and the world of culture.

More information about the Quaderni/Disegni project can be found at this link: www.arbos.it/quaderni-disegni/

“What is the Terzo Paradiso (Third Paradise)?

It’s a combination of the first and second paradises. The first paradise was one where human beings were totally in harmony with nature. The second is an artificial paradise, created by human intelligence through a process which has now taken on global proportions. This paradise consists of artificial needs, products and commodities, of artificial pleasures and every other form of artifice.
(…) The Terzo Paradiso project consists of harnessing the artificial world (i.e. science, technology, art, culture and politics) to restore life to the Earth, linking this to an effort to re-establish common principles and ethical behaviour, because the success of the project depends on these.
(…) The symbol for Terzo Paradiso involves a re-configuration of the mathematical sign for infinity and is formed from a line which intersects twice, creating
three aligned circles. The two outer circles represent nature and artifice, while the one in the centre is a combination of the two and represents the fertile womb of a new humanity.”

More information about the Third Paradise at this link > http://terzoparadiso.org/