On April 13th, during the Inter-regional workshop “Creative and cultural industries: which strategies for which cultural needs”, promoted by Ca’ Foscari university of Venice in collaboration with the Veneto and Apulia Regions, the Chairman of Arbos, Mr. Sergio Paolin, took part in the debate that involved approximately fifty companies of the sector.

In particular, during the debate driven by Mirko Artuso, director of Teatro del Pane (Bread Theatre) the representatives of the participating companies had the opportunity of comparing their experiences in order to clearly define the specific features of the Cultural and Creative companies of the Veneto and Apulia regions, starting from the tangible point of view of those who have created – and actively operate within – these realities.
The Venice university has now for some years been involving those entrepreneurs that put culture and creativity at the centre of their business models. And thanks to its collaboration with designers and artists, in this respect Arbos is indeed a company at the forefront. During the debate, which also saw the participation of the Executive Councillor for Education and Work, Mrs. Elena Donazzan, it emerged how Veneto has acquired a leading position in terms of companies that see creativity and culture as fundamental values of their missions.
The object of the workshop, as indicated by Executive Councillor Elena Donazzan, is to “help companies to exchange experiences on growth and development strategies, and on the demand of professional individuals specialised in one of the new sectors emerging from the new entrepreneurship model, as well as creating new training paths that can offer tangible job opportunities.”
The Chairman of Arbos, Sergio Paolin, emphasised how today for the company the problem is no longer to produce objects, because what is lacking is not products, but meaning, information and communication.
An in fact, according to Paolin, for a consumer more and more interested in products with symbolic and emotional connotations, art could represent the absolute object.
“I believe” added Paolin, “that it is indeed through continuous exchanges among the operators of these two fields that it will be possible to create new reference models for a culture and an economy that require new vital stimulations.” 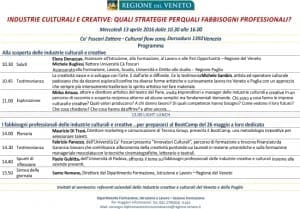 In the photo on the top of the page: our President, Sergio Paolin, talking during the worksop and seated Mirko Artuso and the school and work supervisors from Veneto and Puglia Elena Donazzan and Sebastiano Leo.